Earlier this month, I spent a week building OpenCV 3.2.0, with the intention to reproduce the contour detection demo I witnessed at MoCoMakers meetup. I successfully made contour detection working on PiCamera through MJPEG streaming. P.S. Can you tell the Hack Arizona 2016 shirt? 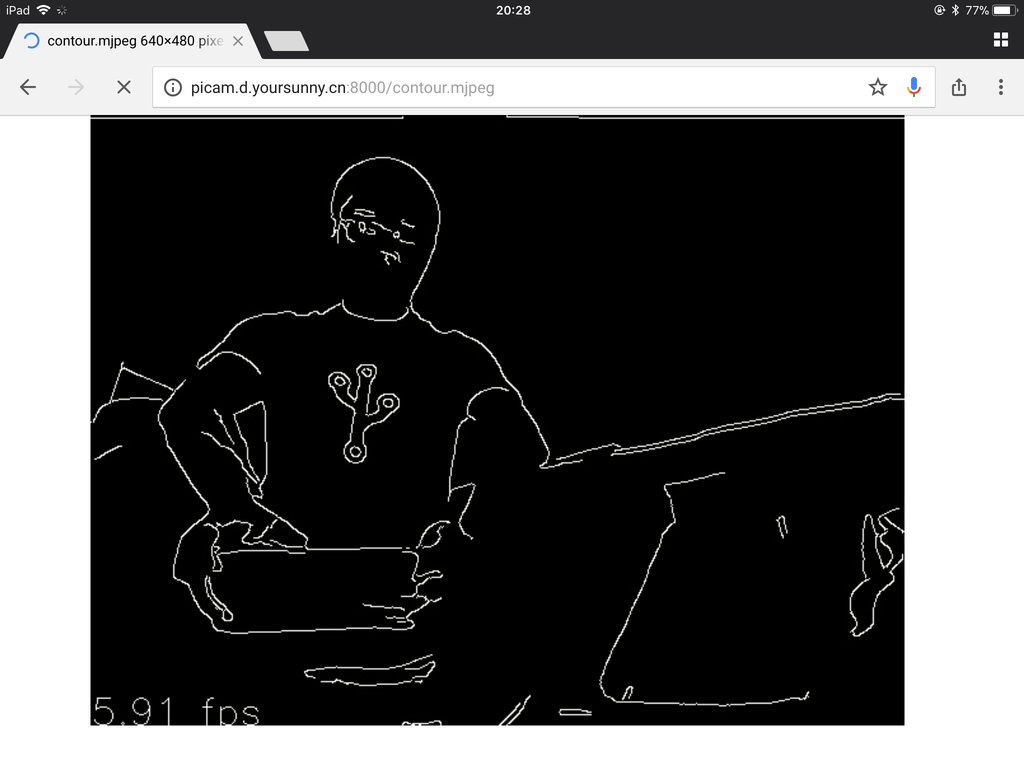 Their code works with a MJPEG stream from an Android phone. It extracts a JPEG frame from the video stream, processes the image through makeContour function, and displays the result. The makeContour function converts the RGB image to grayscale, blurs the grayscale image, and runs the Canny Edge Detection algorithm.

OpenCV has two supported versions: 2.4.x and 3.x. New features are being added to 3.x branch, while 2.4.x only receives bug fixes and efficiency fixes. It is recommended that new developments should use OpenCV 3.x, to take advantage of new features. However, the official operating system for the Raspberry Pi, Raspbian Stretch, comes with OpenCV 2.4.9. While I am not yet familiar with OpenCV algorithms, one thing notably missing from OpenCV 2.4.9 is a Python 3 binding.

I wanted to have OpenCV 3 running in Raspbian Stretch on a Raspberry Pi Zero W. Unable to find existing packages for Pi Zero and Stretch, I had no choice but to compile my own OpenCV 3. I decided to do it the proper way: build a backported Debian package. This method is superior to installing from the source code, because the packages can easily be deployed to other Raspberry Pi Zero W computers. I followed the Simple Backport Creation instruction, and spent a week building the packages. Now I'm sharing my compiled packages, so that you can use them if you dare.

The newest members in my toy collection are a Raspberry Pi Zero W (paid link) and a NoIR Camera Module (paid link), purchased in Dec 2017. Recently, I witnessed an impressive Contour Detection demo at MoCoMakers meetup. I read their source code, and it has a dependency on cv2 Python package. Therefore, the first step to get it working on my RPi Zero would be installing OpenCV that provides cv2 package.

While Raspbian Stretch offers a python-opencv package, it is version 2.4.9 released in 2014, and it only works with Python 2 but not Python 3. Since I'm starting from scratch, I wanted to develop on newer platforms: OpenCV 3.x and Python 3.

Many online tutorials suggest compiling OpenCV from source code. There are also a few sites offering pre-compiled tarballs, but these are either compiled for the Raspberry Pi 3, or built for Raspbian Jessie; neither would be compatible with my Raspberry Pi Zero W running Raspbian Stretch. Therefore, I started my quest to build OpenCV 3 for Pi Zero.

When I first learned Linux, the standard process of installing software is wget, tar xzvf, ./configure, make, make install. Today, this is no longer recommended because software installed this way is difficult to remove and could cause conflicts. Instead, it is recommended to install everything from Debian packages.