Air602 is a 2.4GHz Wi-Fi module based on Winner Micro W600 system-on-chip. Being a new release, it has limited software support. It took me more than a day to make it blink.

Naturally, the next step is to connect a sensor. I decide to reproduce the ESP8266 weather indicator but with Air602 instead. 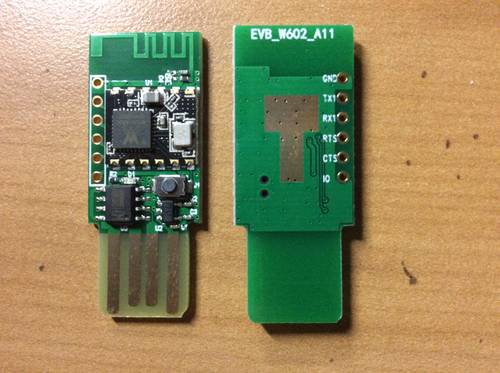 Despite that the serial port labeling, W600 SDK supports pin multiplexing. For example, PB11 and PB12 can be used for I2C, as one of five valid choices. Otherwise, every pin is usable as GPIO, as I was able to blink a row of LEDs.

Notably, Air602 has no POWER pin. This is a major obstacle in connecting external devices to the Air602.

TM1637 needs 5V power, same voltage as USB. To obtain 5V power, I looked up USB connector pinout, and soldered a male pin header to the 5V line of the USB connector. A drawback to this approach is that the added solder ball shortens the USB plug, so that the plug would be loose on some USB ports. 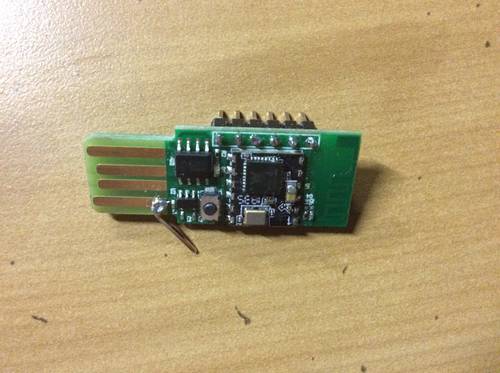 HTU21D is a 3.3V sensor. Adafruit HTU21D sensor breakout (paid link) is 5V-compatible, but I cheaped out and bought a generic HTU21D (paid link) that does not have a voltage regulator, so I have to come up with a way to supply 3.3V. Air602 hardware design manual says that pin 4 of the 12-pin square board is 3.3V power. However, hand-soldering a pin header or a wire onto this position would be difficult. I chose an easier way: using a GPIO. HTU21D's max current consumption is 500μA when measuring, which is much lower than W600's max drive of 24mA. Therefore, I can safely supply power to HTU21D from a GPIO pin. 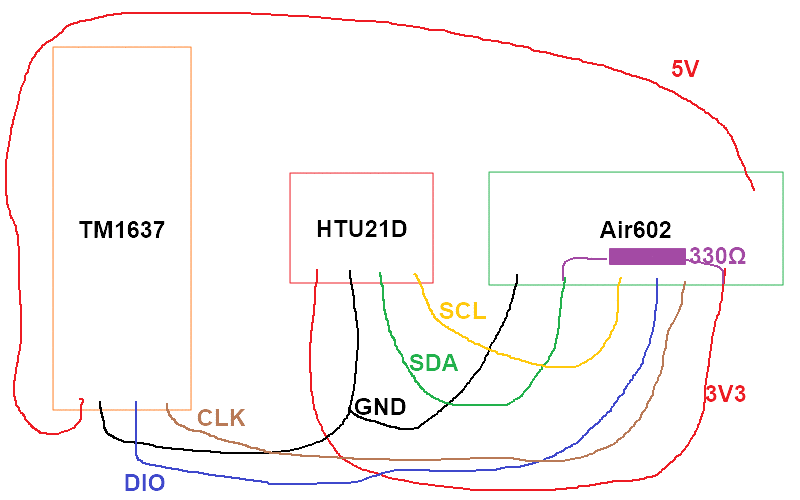 W600, being a new chip, does not have an Arduino core. This means, all my favorite Arduino libraries aren't going to work on Air602. I have to translate everything to fit W600's C SDK.

TM1637 driver was translated uneventfully. The TM1637 Arduino library controls the LED display by bit-banging on two wires, and I did the same. One challenge is that I can't find an equivalent of delayMicroseconds in the C SDK, but I made a for loop and it seems to be working:

HTU21D driver is more complicated. The HTU21D-F Arduino library uses Arduino's I2C library that works at a higher level than W600's wm_i2c.h APIs. I had to read I2C tutorial to understand things.

My initial translation fails at READREG step. In Adafruit's library, Adafruit_HTU21DF::begin() function has this code:

However, the reg value I got is either 0x00 or 0xFF, not the expected 0x02. Even if I ignore this error and proceed to read the temperature and humidity, the outputs are all wrong. Clearly there are some signal problems that can only be sorted out with a logic analyzer (paid link) that I do not have, and the makerspace isn't open until next year. So I built a logic analyzer to watch the signals:

Tracing the signal lines, I notice that the I2C read address 0x81 did not appear on the SDA line. I don't know the root cause, but inserting a 1-tick delay before that line solved the problem.

As soon as I disconnect the logic analyzer, the numbers are off again. I tested a few things, and found that adding a pull-up resistor on the SDA line solves the problem. I can't choose resistor value because the only one I have is 330Ω, since I cheaped out again and bought an industry supply 100-pack instead of a resistor kit (paid link).

I'm surprised to learn that they squeezed an operating system into this tiny W600 chip. It's not Linux, but FreeRTOS, a real time operating system for microcontrollers. One of its features is to support multiple tasks. Therefore, I can perform measurement on HTU21D in one task and manage TM1637 display in another task. Each task can have its own loop, and I don't have to combine them into a single loop() function like Arduino does.