Losant is a simple and powerful IoT cloud platform. The platform provides a MQTT broker that sensor devices can connect to and report state in real time; the reported states are stored in the cloud, and can be visualized in several formats.

Recently, Losant sent me a Builder Kit which contains an ESP8266 WiFi chip on Adafruit Feather Huzzah, a TMP36 temperature sensor, and some other components. Following the official instructions, 1.5 hours later, my room temperature shows up on a webpage.

I'm excited, and I decide to leave it running continuously so that I can monitor the activities of @TheTucsonHeat. However, Losant platform shows the device as "offline" from time to time, and sometimes it never comes back online unless I press the hard-reset button. This is mostly because of the bad WiFi in my apartment: 1000ms huge delay, 10% or more packet loss, etc. Since MQTT is based on TCP, it's severely affected. To make things worse, our WiFi connects to the Internet through two levels of Network Address Translation (NAT) gateways; it seems that the ESP8266 sometimes is unable to detect the TCP connection to Losant broker is broken, and thus does not take recovery actions.

As a computer networking student, the first thing coming through my mind is the end-to-end principle: the reliability of an application should be ensured by the end hosts, not by the network. To test whether my temperature sensor remains connected to Losant, I should send a message to the Losant platform, and let the platform send back a reply. And that's the idea of LosantPingPong: an end-to-end connectivity test between a connected device and the Losant platform.

The LosantPingPong protocol is very simple:

Losant platform accepts an attribute in the state report only if the attribute is registered. Therefore, add a act attribute as String type for the device.

I could have used a Boolean type like the button attribute in the official instructions, but I used a String so that all kinds of actions (including the button) can share this one attribute.

And then, we need a workflow that looks like this: 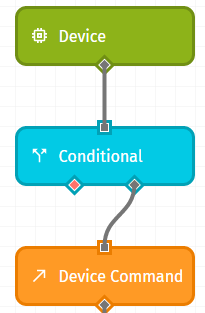 I've separated LosantPingPong into a class, so that it can be reused across different projects. It's a good habit to write Doxygen for a reusable class~

And here's the implementation of this class. The LosantPingPong::loop function checks whether a ping is due. If a ping is due, the function checks whether a pong has been received for the previous ping. If a pong is missed, we increment the n_nMissedPongs counter, and disconnects the MQTT client if this counter goes over the threshold; if a pong has been received, we reset the n_nMissedPongs to zero because it's meant to indicate the number of missed pongs in a row , not the total missed pongs. Finally, we send the ping as a state report to the Losant broker.

Finally, we integrate the LosantPingPong class into the sketch. You may have noticed that the class would only disconnect the MQTT client, but make no attempt to reconnect it. The sketch is responsible for reconnecting when it detects the MQTT client is disconnected (!device.connected()).

This feature has been running fine in my Losant Builder Kit. The bad WiFi of my apartment still disconnects the ESP8266 from time to time, but it has always been able to reconnect whenever possible.

The protocol and implementation can be improved in several aspects:

Also, pings from a device along with Disconnect events from MQTT broker can be recorded, and used to visualize device uptime. I'll cover this idea in a future post.

UPDATE 2016-05-16: Brandon points out, MQTT has a ping packet, which is sent every 15 seconds by Losant Arduino SDK, and the MQTT client disconnects if ping is timed out. Therefore, LosantPingPong is unnecessary.